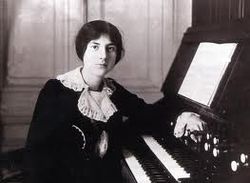 It was in her final winter days, in 1917-1918, that Lili Boulanger imagined a piece, brimming with life, for violin, cello and piano. This bouncy morning reminder, contemplating soft spring sunshine, was performed for the first time in February 1919 at the Societe Nationale de Musique. This posthumous act was sister Nadia’s initiative (1887-1979) who herself played the piano part. The little sister of the “Boulangerie” would live decades perpetuating her sister’s memory via the transmission of legacies of this older sibling who died much too soon, and worked throughout her lifetime scrupulously on the publication of different versions of D'un Matin de Printemps.

The piece presents a traditional A-B-A format with an obstinate rhythm, using an energetic theme notes as gay and light, followed by a mysterious episode in which we see the sun piercing through, blazing and happy, then concluding with a triumphal return of the first episode. Looking with a close eye shows a great deal of subtleties and rich harmonies in this miniature, astounding for the work of a young 24-year-old woman. Her older sister Nadia championed this work and eventually worked an orchestration for symphonic orchestra in the final days of Lili’s short life. However, this orchestral version was not published until 1993.

In 2008 François Branciard, while studying with Denis Cohen at the Paris conservatory, took up a proposal directed at Denis’s students to write orchestrations for French piano and chamber music. Branciard imagined a brilliant and luminous version of Lili’s work. It was a work perfectly in line with the great transcriptions of the French school. His orchestration is tailored with great finesse and draws inspiration from the sparkling colors of the Fetes or de la Mer from Claude Debussy, showcasing the woodwind and saxophone parts in this whirling sound of the reveille.