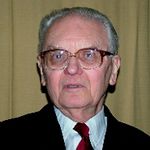 In his first creative period, Kohoutek coped with the classical and romantic heritage as well as the influence of folklore. He gradually arrived at the critical unorthodox application and synthesis of modern composition principles which, in 1957, crystallized in his own project composition method. This method consists in drawing up a composition plan in graphic form with a time axis which is realized in concrete sound form in the process of creation. Every composition is given its individual form and stratification of expression in agreement with its message. Since 1965, Ctirad Kohoutek has written most of his works in this manner. His latest period in the work is characterized by a simplification of compositional means and the effort for communicativeness of the music.