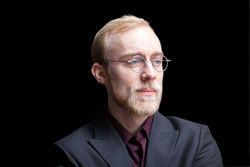 Craig Michael Davis (b. 1990, California) is an American composer, conductor, and pianist.

As a pianist, Craig has toured the United States and Europe giving performances of his original works. He often collaborates with painters and dancers to create new works that last anywhere from 5 minutes to 5 hours. Craig has become increasingly interested in writing and performing music in cross collaborative-genre venues that deal with multiple mediums simultaneously.