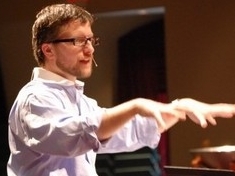 Craig Biondi (b. 1975, Texas) is an American trumpeter, composer and arranger.

He was educated at The University of Texas at Austin and the Hartt School, from which he holds a master's degree in composition.

Biondi’s music displays a wide range of styles and interests, hoping to engage listeners with sounds both familiar and foreign. He often likes telling musical stories, describing real-life people, places, and things with which he shares a personal connection.

Biondi's works for the concert hall and stage have been performed throughout the U.S. and Europe by such notable groups as the Dallas Wind Symphony, the Wintergreen Festival Orchestra, and the Yale Brass Trio.