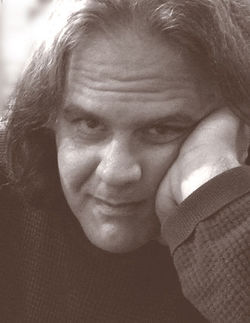 Professor Gary Green, friend and colleague, asked me to write something for him as he neared the "autumn" of his career. I was honored, thrilled and daunted by the weight of such a task and struggled with ideas and concepts for over two years. I began sketches for several wind and percussion works and finally settled on a set of songs for soprano and wind ensemble. While working on the songs I had a very numinous dream as observer: In the midst of a terrible storm I caught glimpses of a frightening creature – a great dark angel with mottled wings and scales, snake-like eyes and clawed hands. With each flash of lightning, the image shifted from this to something sentient and cherubic to what one would "normally" consider "angelic" and back. Within all of this, I remember an intense brass fanfare with distinctive pitch content. I called Gary up that day and proposed a trumpet concerto for our newest faculty member – Craig Morris. We got in contact with Craig, who graciously agreed to risk his Miami première on an unknown work, and the decision was made to go ahead without looking back.

Concerto for Trumpet is scored for expanded orchestral wind and percussion section and therefore can easily be performed by either wind ensemble or orchestra. Each of the three movements explores a different relationship between the trumpet and wind ensemble. Despite the vivid dream which inspired the work, it is not programmatic in any real sense. The movements have "end titles" that are personal but not intended to tell any particular story. Concerto for Trumpet is gratefully dedicated to Gary Green.

The first movement, "…falling angels", begins with a violent explosion of themes from the winds and percussion. The solo trumpet interrupts all of this and begins a more lyric exposition of the melodic materials in various chamber settings. An accompanied cadenza transforms into a double development which builds to the opening trumpet theme but does not actually resolve and return any other materials until the final movement.

Movement two, "…the river Lethe", explores two main melodic ideas with the trumpet integrated into the ensemble rather than as protagonist. The opening English horn melody, which is not heard again until the end of the third movement, does provide harmonic materials which are heard throughout the second. The other melodic idea, presented in the solo trumpet and brass goes through continuous development, being deconstructed and transformed, until the climactic renewal at the end where it collapses in on itself.

Movement three, "…cthonic dance", begins as a fun, asymmetric romp for the trumpet but quickly turns into a rhythmic tour de force for the entire ensemble, gathering speed towards an unusual trumpet cadenza. The movement might have been a fully fledged rondo were it not for the sudden interruption by the "…falling angels" brass fanfares. These herald the actual return and resolution of the first movement themes now in a more settled and intimate chamber setting while the solo trumpet finally returns to the opening theme of the second movement. This calm does not last too long and is transformed back into the third movement themes with the smooth suddenness of an afternoon tropical storm. Through call and response, the trumpet leads the ensemble onto a final climax.