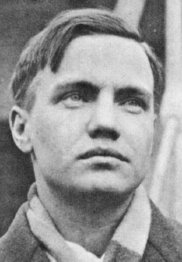 Perhaps George Antheil’s most famous composition is his Ballet Mécanique, which he wrote in 1926. His controversial music enhanced his reputation as an enfant terrible, a character description that he evidently desired because it fit into his world of the avant-garde.

His Concerto for Chamber Orchestra was originally titled Octet for Winds. An episodic first section, built on Antheil’s favourite ‘modules’, comes across lean and disjointed, with the ensemble breaking off into a series of duets and trios, leading directly into the second section, alternating with episodes in a steady, walking rhythm. The third section begins with a literal restatement of the work’s opening measures.

The work premiered in March of 1932 at a concert held by the League of Composers, who commissioned the composition from Antheil. One interesting observation is the distinct similarity of orchestration between the Edgard Varèse’ Octandre (1923), and Antheil’s Octet, the only difference being the substitution of contrabassoon for double bass.