Come Back from "Dogfight" 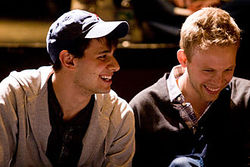 Dogfight is a musical with music and lyrics by Bej Pasek and Justin Paul (known as Pasek and Paul) and a book by Peter Duchan. It is an adaptation of Nancy Savoca's 1991 film, Dogfight. The musical premiered Off-Broadway at the Second Stage Theatre in 2012, and in August 2014, the musical had its European premiere at the Southwark Playhouse in London.

Come Back is sung by Vietnam veteran Eddie Birdlace upon his return to San Francisco.