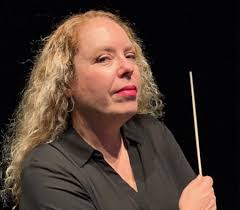 Collette Hausey (b. 1970) is an American composer and educator.

Dr. Hausey earned a Bachelor of Music (Composition) degree from San Diego State University in 1993, a Master of Music (Conducting) degree from SDSU in 1995, and was awarded her Doctor of Musical Arts (Wind Conducting) from the University of Arizona in 1997. She is professor of music, director of bands and applied music studies and music department chair at Golden West College in Huntington Beach, California. She is an accomplished conductor, composer, arranger, bassist, and percussionist, and is well known throughout Arizona, California, Colorado, Hawaii, Nevada, New Mexico, Oregon, Utah, and Washington as an adjudicator, clinician, guest conductor, and honor band conductor.

Dr. Hausey has composed music for the Pasadena Tournament of Roses Parade and has arranged music for the opening television segment of the Hollywood Christmas Parade. The Disneyland brass quintet The Bell Hops have performed several of her brass quintet arrangements at the Disneyland Resort, and her pep band arrangements are frequently heard on nationally televised NCAA basketball games. Six of her many commissioned works are marches: Marsche Minor (2003), Eagle, Globe & Anchor (2008), The Irish Brigade (2011), The Army and Navy Forever (2012), Pride of the Eagles (2013), and Volunteers of the Union Army (2013). The 1st Marine Division Band (USMC) includes Eagle, Globe & Anchor in its concert, ceremonial, and parade repertoire.

Dr. Hausey was elected to membership in the American Society of Composers, Authors, and Publishers (ASCAP) after two of her concert band compositions were premiered at the famed Carnegie Hall in New York. Her works span a wide range of genres including concert band, orchestra, marching band, mixed ensembles, and instrumental solos. Her compositions and arrangements are in high demand, and have been performed in the United States, Europe, and Japan by middle school, high school, college, university, professional, and U.S. military ensembles.