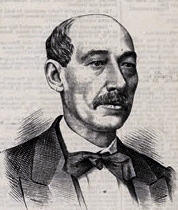 Grafulla immigrated to the United States in 1838. It is possible that he made the journey as a musician aboard ship, but this has not been substantiated. While his name is Italian, it is believed that he had Spanish ancestry. It is not known what instruments he played, but he served as a piccolo player while with the New York Brass Band, which he left in 1844.

The 27th Regiment was renamed the 7th Regiment in 1847, and Grafulla was engaged as bandmaster late in 1859.

Settling in New York City, he became a member of Lothier's New York Brass Band, which was attached to the famed 7th Regiment of the New York National Guard. He was leader of this band for seven years, including a brief period when the band was attached to the 27th Regiment. In 1859 or 1860, he was asked to form a new 7th Regiment Band, with 38 musicians. The new band gave its first public performance on February 18, 1860, with great success. The band quickly gained a fine reputation and eventually grew to 50 members. Grafulla led the band for 20 years, receiving no compensation from the government. The band was especially popular during the Civil War, and newspapers of both New York and Washington, D.C., made occasional mentions of the band's skill and Grafulla's superb musicianship. They were featured at receptions, weddings, social balls, and other events.

Grafulla took mandatory retirement at the age of 67 in 1880.

Although the composer of many works, Grafulla was known during his lifetime primarily as a skilled arranger. In addition to lighter pieces, he also arranged classical works, including numerous operatic excerpts. His original works are seldom played today, with one notable exception: the Washington Greys is regarded as one of the finest marches ever written and has become an international band standard.