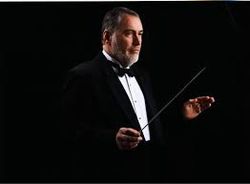 McAlister began his Ph.D. studies at the University of Miami in 1977 with, among others, Frederick Fennell and Alfred Reed. He received a scholarship for composition of the Florida Arts Council.

Dr. McAlister became a musical multitalent. He was associated with the Florida Philharmonic Orchestra as second conductor, librarian and staff manager. In 1981, he received a part-time appointment at Kalmus Publishing. In 1998 Joan Galison retired and Clark McAlister became Vice President of the Music Publishing Board and the affiliated Masters Music Publications. He is the chairman of the board and music producer at the label Klavier Records.

He is also music director at Palm Beach Community College in Lake Worth and composer in residence at the University of Montana in Missoula. He is also a teacher and instructor at the Canford Summer School of Music in the United Kingdom.

As a conductor, Dr. McAlister is also connected to the Deerfield Beach Symphony Orchestra , the Sunrise Symphonic Pops Orchestra, and is host conductor of the Eastern Wind Symphony and the Keystone Wind Ensemble.