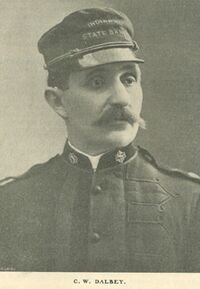 Dalbey spent most of his life in Des Moines, Iowa, with his wife and daughter. From 1902 to 1904, he was director of the famous Iowa State Military Band. During his tenure, several famous musicians played under his baton, including C. L. Barnhouse, Dick Platt, and T R Boyer.

Dalbey suffered a mental collapse in 1909. He was committed to the Iowa State Mental Hospital in Clarinda, where he died on March 30, 1912. While a patient in the hospital, the venerable Major George Landers, a close friend and director of the 55th Infantry Band of the Iowa National Guard, often brought his band to the hospital for their summer programs and honored Dalbey by playing his compositions. At Dalbey’s funeral, Landers’ band played many of Dalbey’s favorites.