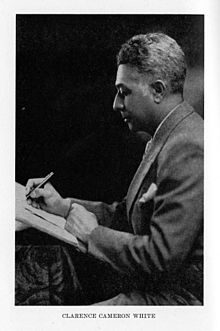 White studied with Samuel Coleridge-Taylor. He was educated at Oberlin Conservatory and Howard University, and later taught at the Washington D.C. Conservatory, West Virginia State College, and the Hampton Institute.

White maintained an active career as a performer, teacher, and composer. From 1902 to 1903, White contributed articles on violin pedagogy and history to The Negro Music Journal, and from 1903 to 1907 served as the head of the string department of the Washington Conservatory of Music, founded by pianist, educator, and Oberlin alum, Harriet Gibbs Marshall. As a concert violinist he received critical praise and toured the United States with his wife, pianist Beatrice Warrick White.

A founding member of the National Association of Negro Musicians, White served as the organization's president from 1922 to 1924. From 1924 to 1930, he taught at West Virginia State College and succeeded R. Nathaniel Dett as head of the music department of Hampton Institute from 1932 to 1935. In this period he wrote his best-known works: the ballet A Night in Sans Soucim from the play Tambour, and the opera Ouanga. These works are based on Haitian themes working with playwright and librettist John Matheus.

White’s catalog of compositions includes violin and orchestral works, a ballet score, two operas, and myriad settings of African American Spirituals. The titles of much of his music reflect his black heritage, e.g., Cabin Memories, From the Cotton Fields, Kutomba, and two collections of Negro spirituals. His compositions won numerous awards.