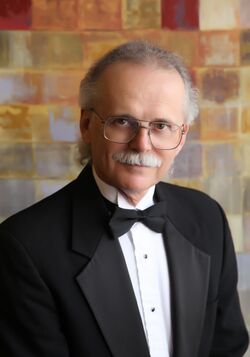 Clarence Barber (b. 3 March 1951, Akron, Ohio) is an American composer and educator.

Mr. Barber is a graduate of Kent State University, and has taken advanced studies at Kent State and the University of Akron. He studied percussion with James R. Adkins, Michael Rosen, and Dr. Larry Snider, and composition with Walter Watson and Ralph Turek.

Barber served as assistant director of bands at the Midview Local Schools in Grafton, Ohio, from 1985 to 2006, and is currently a composer and editor with Ludwig Music Publishing Company. A member of the American Society for Composers, Authors and Publishers, the Percussive Arts Society, and a “composer-friend” to the International Tuba Euphonium Association, Barber is also an adjudicator for the Ohio Music Education Association and is a member of the Music Educators National Conference. He has received seven consecutive ASCAP Awards for his music. In addition to his music for band, Barber has written music for chamber ensembles.