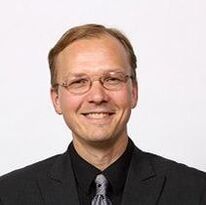 Come and show me another city with lifted head singing so proud to be alive and coarse and strong and cunning.
– Carl Sandburg, from the poem “Chicago” (1914)

With its storied history, vibrant culture, and famous landmarks and skyline, Chicago stands as one of America’s great cities. City with Lifted Head Singing celebrates Chicago and conveys the spirit of raw confidence expressed in the line from Sandburg’s iconic poem.

A fanfare-like melody opens the piece with a bold statement, proudly announcing the city’s strength and grandeur. In the sections that follow, the music reflects the constant bustle of the city’s modes of transportation and the rhythmic energy of the city’s cultural and artistic life. In the middle section of the piece, impressions of the breaking waves of Lake Michigan and the soaring majesty of the cityscape work their way into the texture. Eventually the opening ideas are recapitulated, leading to a joyous and somewhat raucous ending.

Although I have never been a resident of Chicago, the city has played an important role in the life of my family. It is the city to which my parents came from Czechoslovakia in 1969 as they began their life in the United States. One of my brothers was born just outside the city, in Evanston, and my other brother studied for many years and currently resides and works in the city’s South Side. During my years of music study in Michigan and Indiana, I passed through Chicago many times going back and forth from school to my hometown of Rochester, Minnesota. Chicago’s sights and sounds, as well as the memories of my own experiences, have made an indelible impression on me.

These experiences, along with the incredible diversity of Chicago’s people, its cultural offerings, its landmarks, and its scenery, provided inspiration for City with Lifted Head Singing. Its overall feeling of raw vigor and drive convey a spirit of grit and determination that is associated with the city’s hard-working industrial roots conveyed in Carl Sandburg’s poem from which the title is derived. In a nod to Chicago’s rich ethnic diversity, various styles are woven into the musical fabric. The constant rhythmic energy and frequent syncopations evoke the rhythmic dynamism of Hispanic music, which forms an important strand of Chicago’s cultural life and which I have experienced during my time in El Paso. In the piece’s middle section, motives from the spiritual Swing Low, Sweet Chariot are worked into the texture. Not only is this spiritual a notable work from the African-American culture that has contributed so much to the city, but it also served as an inspiration for the Czech composer Antonín Dvořák, who incorporated elements of the tune into his New World Symphony (a favorite work of mine) and who took the stage at Chicago’s Columbian Exposition in 1893, thus establishing a direct connection to the city and my own Czech heritage.

My hope is that this piece reflects some of the ethos of Chicago and will provide musicians with a fun challenge and an opportunity to express a spirit of pride, optimism, and resolve during these difficult times.

Each part may be assigned to any instrument.

Options for different octaves suitable for various instruments are specified in the parts. Additional octave adjustments may be made as needed. In several places (most often involving sixteenth-note runs), there are minor changes in some parts to accommodate the instruments likely to play those passages.

Parts 1, 2, 3, and 4 are intended for advanced players, while parts 1a, 2a, 3a, and 4a are intended for players with less experience or for those playing instruments for which certain fast sixteenth-note passages are less idiomatic (e.g., trombone). This piece also can be performed with any combination of regular and “a” parts.