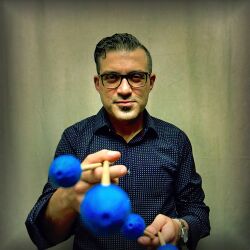 Christos Rafalides (b. 9 April 1972, Kozani, Greece) is a Greek composer, educator and vibraphonist.

Christos Rafalides began playing music at an early age after the influence of his older brother who played the piano. At age fourteen he began studying classical percussion, and by twenty he had begun working with orchestras around Greece. Rafalides claims he had initially intended to pursue a career as a classical percussionist, until one evening when he heard pianist George Cables in a group with Billy Cobham. Rafalides remarked about the event citing this as the moment he decided to pursue a career as a jazz musician.

In the early 1990s, Rafalides received a scholarship to Berklee College of Music and moved to Boston where he completed his Bachelor of Arts degree studying under Ed Saindon. Following this he moved New York City to achieve a Master's degree and study with acclaimed jazz vibraphonist Joe Locke at the Manhattan School of Music. During this time Rafalides began to perform within the New York City jazz scene alongside artists including Ravi Coltrane, Antonio Sanchez, Donny McCaslin, Hector Martignon and Ron Affif.

Rafalides has been a recurring guest faculty member at the Zeltsman Marimba Festival, a summer percussion festival that takes place in different parts of the world each year. Rafalides also has a continuing Artist Residency at the Music Village in Greece. He is also on faculty at Queens College teaching private lessons.