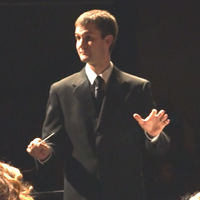 Christopher M. Nelson (b. 1987, Keizer, Oregon) is an educator, composer, arranger, and percussionist.

Mr. Nelson holds a Master of Arts in Music Performance with a Conducting Emphasis, from Washington State University, and a Bachelor of Music in Instrumental Music Education from Brigham Young University in Provo, Utah. Chris comes to Timpanogos High School from Pullman, Washington, were he served as a Graduate Teaching Assistant in the School of Music. He was responsible for assisting the WSU Bands, Percussion Ensemble, and lecturing in music history and music education courses. While at WSU, Chris studied conducting with Doctors Danh Pham, Troy Bennefield, and Matthew Aubin, and studied percussion with Professor David Jarvis.

Currently, Mr. Nelson serves as the director of bands at McNary High School, and as a member of the board of directors for The Battalion Drum and Bugle Corps. He has held positions at Westlake High School in Saratoga Springs, Utah, and at Maple Mountain High School in Spanish Fork, Utah. His musical ensembles have consistently been recognized for their high level of achievement with superior ratings and multiple caption awards. As a percussionist, Chris has performed with Utah Premiere Brass, and has recorded for the international television station BYU TV.