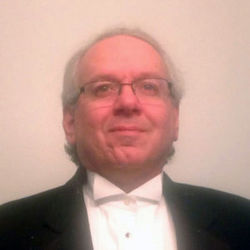 The composer writes about Christmas Kaleidoscope:

I’ve always enjoyed Leroy Anderson’s A Christmas Festival, but I wanted to do something for the holiday season that’s written especially for wind ensemble (Anderson’s piece is a transcription of an earlier, orchestral work). Rather than a simple medley, I conceived Christmas Kaleidoscope in the form of a rondo, with Over the River (or a variation of it) as a continuing refrain, with other carols, songs or hymns serve as the alternative musical episodes. While working on the piece I realized it would be possible to interpolate Over the River in amongst the other carols, so the attentive listener will occasionally hear two songs at the same time. Further, I’ve arranged the work so that each section of the wind ensemble, including pitched and unpitched percussion, has a bravura moment or two.

Most of the songs selected represent the festive aspects of the holiday season, but there is a quieter,

central section that’s a little more spiritual in nature. I invite the listener to imagine a busload of slightly tipsy carolers (with a designated driver, of course!) having a sing-off, with various factions each making the case for one of ten favorite holiday tunes.

Mr. Stroble would like to dedicate Christmas Kaleidoscope to Dr. Wesley Broadnax and the Drexel University Wind Ensemble, with gratitude for support and encouragement for the novice (but not young) composer.