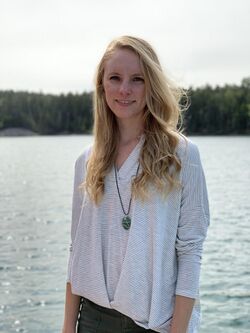 Christina J. George (b. 25 December 1996) is an American composer-flutist and student.

Ms. George grew up in rural northwestern New Jersey and completed her B.M. in composition and performance at West Chester University of Pennsylvania. She is currently [2021] pursuing a Master’s of Music degree in composition at Longy School of Music of Bard College. Her teachers include Robert Maggio, Jacob Cooper, Amy Beth Kirsten, Adam Silverman, Van Stiefel and Sabrina Clarke.

Christina is an alumnus of the Nief-Norf Summer Festival, Amy Porter’s Anatomy of Sound and the Scottish International Flute Summer School. She has performed in master classes with flutists Erica Peel, Amy Porter, Christina Jennings, Greg Pattillo and Ian Clarke; she has also performed at numerous festivals with the West Chester University Wind Ensemble, including the 2018 New York Wind Band Festival at Carnegie Hall and the 2019 CBDNA National Conference. In 2017, Christina was chosen as a winner of the West Chester University Wind Symphony Composition Competition.

Christina's compositions fuse ambient music with popular styles and classical forms. A lover of the process, she seeks solace in creativity and collaboration, and she often draws inspiration from the organic shapes of the natural world. Her music has been described as effective, reflective and evocative, raising questions which open up new possibilities.

She was the recipient of the Margaretta Carey Prize for Instrumental Composition three years consecutively for her flute compositions, The Drowning of Morena, [breathe] and Lotus-eater [daydreamer]. She has also participated in a reading session with Third Coast Percussion.