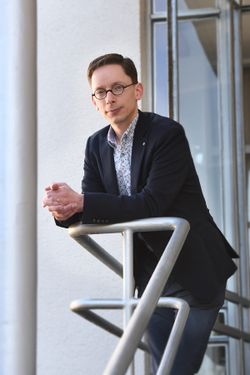 Christiaan Janssen (b. 19 February 1974, Netherlands) is a Dutch composer and conductor.

Janssen has been involved with music since the age of five. When he was seven he went to the “Muziekacademie” in ‘s-Gravenvoeren in Belgium to study theory of music and harmony, and also to play the trumpet and church organ. He studied conducting of wind, fanfare and brass bands with Pierre Kuijpers, organ with Dorthy de Rooij, and symphony orchestra conducting with Jan Stulen at the Conservatory of Maastricht.

Since 1985 Mr. Janssen been experimenting with sound and has been developing as a self-taught composer. He has more than 100 pieces for wind bands, often with a romantic character and often consisting of only a few motifs from which the entire work develops. Counterpoint and a transparent instrumentation play a very important role in this. His work is, like that of all composers, influenced by past masters. The biggest influences on my work have been Johann Sebastian Bach, Anton Bruckner and Richard Strauss.

Mr. Janssen is regularly asked to write a piece or make an arrangement for a wide variety of ensembles, from chamber groups to wind bands and symphony orchestras. To an increasing extent his compositions are being performed by renowned orchestras and ensembles such as Fanfare band Brass-aux-Saxes Westerlo (B), Royal Bevers Wind orchestra Beveren-Leie (B), Royal Wind Band of Thorn (NL), Royal Military Band “Johan Willem Friso” (NL) and many more.

He has been conducting actively since 1994 and currently [2021] conducts a symphony orchestra and two wind bands.