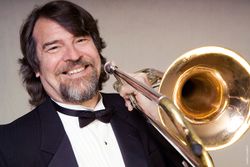 Christopher Brubeck (b. 19 March 1952, Los Angeles, California) is a U.S. musician and composer, both in jazz and classical music. Many of his "classical" compositions still contain strong hints of the jazz influence of his father.

As a musician, he mainly plays electric bass, bass trombone, and piano. The son of noted jazz pianist and composer Dave Brubeck, in 1972 he joined his father and brothers Darius and Daniel in The New Brubeck Quartet. He later formed The Brubeck Brothers Quartet with his brothers.

Chris Brubeck has been touring for about 30 years with guitarist Joel Brown and singer and harmonica virtuoso Peter Madcat Ruth, as Chris Brubeck's Triple Play, which is a jazz band in a swinging Louisiana style.

In 1999, Chris Brubeck and his brother Daniel Brubeck joined with other musicians to form The Brubeck Brothers Quartet (which had briefly pre-existed with Andy LaVerne for a 1972 album as "The Brubeck-LaVerne Trio". While they have performed with various other musicians, as of 2006 the quartet includes Mike DeMicco on guitar, Chuck Lamb on piano, Daniel Brubeck on drums, and Chris Brubeck on electric bass and bass trombone. The quartet performs in jazz venues and with symphony orchestras around the world.