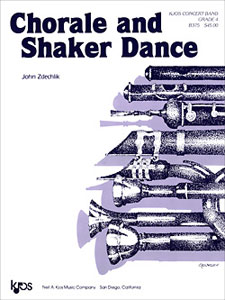 Chorale and Shaker Dance is made up of two main ideas. The first is the simple melody found in the opening Chorale. The second melodic idea is the melody from the well-known Shaker Hymn The Gift to Be Simple.

Chorale and Shaker Dance, written in 1972, combines a simple chorale theme, introduced by the woodwinds, with variations of the well-known Shaker hymn Simple Gifts. There is a progression of instrumental timbres and chord textures as the themes alternate and co-mingle. Brief solos for flute, clarinet, saxophone, and trumpet occur at tempo changes. The brass and woodwinds exchange the themes as time signatures cause increases in both tempo and intensity. Sustained brass sections play the chorale with woodwinds performing a fiery obligato based on the Shaker hymn as the development peaks. A demanding tympani part punctuates the dramatic ending.

Chorale and Shaker Dance was commissioned by the Bloomington (Minn.) Jefferson High School Band. However, the community-based Medalist Concert Band, also of Bloomington, premiered the work in March 1972 at the Music Educators National Convention, with the composer conducting. The work combines an original chorale tune and the traditional Shaker song The Gift to Be Simple. Zdechlik transforms, varies, and juxtaposes both themes throughout the entire composition, incorporating intricate counterpoint and jazz-influenced syncopated rhythms. The Shaker melody does not appear in its entirety until near the end of the piece, when the trumpet section plays the tune over a flurry of activity in the upper woodwinds and a sonorous low-brass accompaniment. A short allegro section follows, and the work draws to a close with several dissonant whole notes that resolve into a brilliant D major chord.