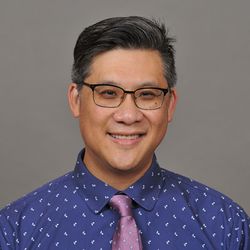 Ching-chu Hu (b. 1969, Iowa City, Iowa) is an American composer and educator.

Honors have included composer-in-residence at the Piccolo Spoleto Festival, and guest composer at the American Music Week Festival in Sofia, Bulgaria. He has been a composition fellow at the Aspen and Bowdoin Music Festivals, Yaddo, The MacDowell Colony, and the Banff Centre for the Arts. He has received performances in various national and international festivals and concerts, including the Alternativa Festival (Center “DOM”) in Moscow and Wigmore Hall in London, England. He wrote the score for The Life and Times of Jimmy B., which was awarded a Directors Guild of America’s East Coast Filmmaker Award. He was the first recipient of the Bayley-Bowen Fellowship, Denison University’s first endowed fellowship for a junior faculty member.

Recent commissions include works for the Granville (Ohio) Bicentennial Committee, the University of Iowa School of Music’s Centennial celebration, the Greater Columbus Community Orchestra, the Newark Granville Symphony Orchestra, the Columbus Children’s Choir and the Chamber Music Connection and the Western Springs School of Talent Education.

Ensembles performing his work include the Kiev Philharmonic, the National Dance and Opera Orchestra of China, and the University of Iowa Center for New Music. Solo artists include violinists Wolfgang David, Scott Conklin and Gabe Bolkosky, flutists Betty Bang Mather and Tamara Thweatt.

Ching-chu Hu is [2019] professor of composition and theory and was recently named the Richard Lucier Endowed Professor at Denison University in Granville, Ohio.