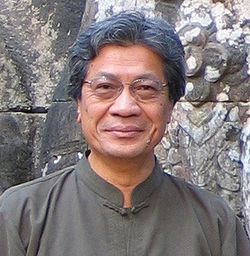 Dr. Ung arrived in the United States in 1964 to study at the Manhattan School of Music in New York City, where he received a bachelor's and master's degree in clarinet and conducting. He then turned to composition studies with Chou Wen-chung and Mario Davidovsky, receiving a Doctor of Musical Arts with distinction from Columbia University in 1974.

In 1988, he became the first American to win the University of Louisville Grawemeyer Award for musical composition. Additionally, he received the Kennedy Center Friedheim Award, as well as awards from The American Academy of Arts and Letters, Asia Foundation, Asian Cultural Council, Rockefeller Foundation, Ford Foundation, Guggenheim Foundation, Joyce Foundation, and The National Endowment for the Arts.

Chinary Ung is often associated with that group of Asian-born composers whose music incorporates aspects of Eastern musical characteristics into a Western classical music setting. Aside from specific cultural and generational distinctions, the principal difference between Ung's work and theirs is that for many years he was prevented from engaging directly with the source of his cultural heritage as his native country was being torn apart by the scourge of the Khmer Rouge. Indeed, as the people and culture of Cambodia were being systematically destroyed, Ung took it upon himself to rescue some facet of the traditional music he had known as a child, reconstituting Cambodian musical traditions through his performances on the roneat-ek -- the Cambodian xylophone.

In October 2007 the Del Sol String Quartet was invited to premiere the composer's Spiral X playing the Library of Congress' collection of Stradivarius instruments.

Dr. Ung taught music at Northern Illinois University, Connecticut College, the University of Pennsylvania, and Arizona State University, before being appointed to the faculty at the University of California, San Diego. In 2013, UCSD promoted Ung to the rank of Distinguished Professor. He currently holds the position of Presidential Fellow: Senior Composer in Residence at Chapman University in Orange, California.