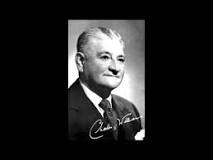 Charles Williams (8 May 1893, London - 7 September 1978, London) was a British composer and conductor. Born Isaac Cozerbreit, he studied composition with Norman O'Neill at the Royal Academy of Music, after which he began his career as a violinist, but soon turned to conducting. He also began composing film scores and light orchestral pieces. Following World War II, Chappell and Company formed the Queen’s Hall Light Orchestra, and Williams was appointed its conductor. This orchestra broadcast weekly for many years. He left the Queen’s Hall post to form his own concert orchestra.

Williams composed a large number of orchestral pieces and marches, which he performed and recorded in the 1940s, 1950s, and 1960s. Among his most famous works are Devil’s Galop, The Way to the Stars, Jealous Lover, and The Dream of Olwen.