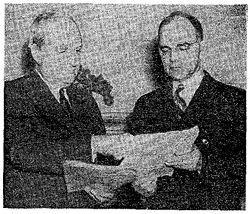 Charles S. Belsterling ( 31 May 1874, Philadelpha - 26 December 1959, New York City) was a successful lawyer, a steel executive, and a lover of bands and band music. A great-grandson of an enterprising Swiss immigrant, Hans Jakob Bölsterli, and, according to family belief, a lineal descendant of the famous French statesman-soldier Marquis de Lafayette, Belsterling inherited musical, business, and public service genes.

He was educated at Central High School of Philadelphia, Neff College, and the University of Pittsburgh Law School. While working with the structural iron and bridge fabricator company A. & P. Roberts (1892 to 1899) and the American Bridge Co. (1899 to 1910), he moved back and forth between Philadelphia and New York. His long tenure with the U.S. Steel Corporation began as a general commerce attorney in 1914 and concluded after he had served as vice president of the giant corporation from 1932 to 1942.

Belsterling was a member of the Masons, the Shriners (for over 50 years), and numerous historical, industrial, and legal associations in New York and Pennsylvania. In addition to numerous legal documents, he wrote at least three books on genealogical subjects.

As a youth, Charles spent considerable time at the piano and eventually began composing. Belsterling reportedly composed a series of marches (for piano) and an Easter cantata while attending high school. Although the marches were played mostly for family and friends, the cantata was performed at a church in Philadelphia. Like many other composers, he will be remembered for one short but very worthwhile piece of music.