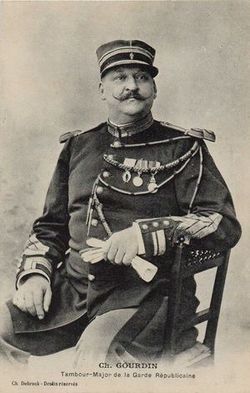 As a young soldier of the class of 1883, he was incorporated into the 46th Infantry Regiment in Auxerre, where he successively obtained the stripes of corporal-fourrier, sergeant-fourrier and sergeant-major. In 1887, he went to the 162nd Infantry Regiment, in garrison at Saint-Denis, as a drum major, followed this regiment at Lérouville and at Commercy, and entered as a brigadier in the Republican Guard on December 30, 1894. He was drum major from 1896 until 1911 when he retired. He was called back to activity during the First World War. He later joined the circus and as music hall artist under the name of Royus.