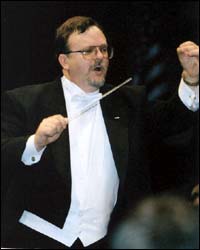 Mr. Booker is currently the associate professor of theory and composition at the University of Arkansas - Fort Smith where he has served as the director of bands (1999-2009), director of jazz studies (1998-2002), and chair of the music department (2002-2006). Booker currently teaches conducting, music theory, orchestration, and composition.

Booker is also a former U.S. Army bandmaster, and received his degrees from the University of the State of New York and the University of Texas at San Antonio. He later completed courses for Texas teacher certification in secondary music at Texas State University. Booker studied composition with Hank Levy (composer/arranger for Stan Kenton), Dr. Steve Strunk, and Dr. James Balentine; and conducting with Dr. Robert Garofalo and Dr. Robert Rustowicz. He was interim director of bands at Trinity University from 1996 to 1997, and assistant editor at Southern Music Company from 1994 to 1997. In addition, Charles Booker is the founder and former conductor of the River Valley Community Band of Fort Smith, Arkansas. When Mr. Booker is not composing or teaching, he performs on trumpet with the Chris Cameron Blues Band throughout Arkansas, Oklahoma, and Texas and with the River Valley Community Band.