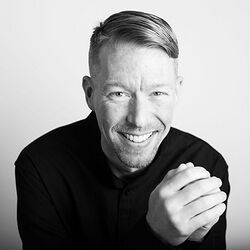 Chad Heiny (b. 26 April 26 1980, Williamsport, Penn.) is an American percussionist, educator and composer.

Mr. Heiny holds degrees from Louisiana State University and Indiana University of Pennsylvania. He is a member of both the Percussive Arts Society and ASCAP.

A regularly commissioned composer, Chad has created music for ensembles and performers across the globe. As a percussion arranger, wind arranger, and program coordinator for high school marching bands across the country, Chad’s work has reached students, staffs, fans, and adjudicators. Accolades include a third-place finish (and the award for High Music) with the Hebron High School Marching Band at the 2019 Bands of America Grand National Championships, several BOA [Bands of America] regional champions, and many BOA regional finalists.

Chad has been a passionate contributor to several drum and bugle corps since 2003, and currently serves as program coordinator for the Blue Knights from Denver, Colo. Prior to this current role, he arranged, coordinated, or consulted for several DCI World Championship Finalists including The Cadets, Spirit of Atlanta, Boston Crusaders, and Glassmen. He is also an adjudicator for Winter Guard International.