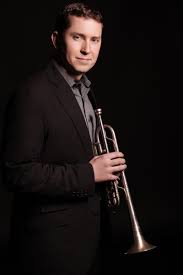 Centennial Horizon was commissioned by Albany trumpeter Catherine Sheridan. With two contrasting movements (Aspen Grove" and "Roaring Gunnison) connected by an interlude (Alpenglow), I have attempted to capture some of the beauty and adventure of what truly is an amazing place: Colorado (the "Centennial State"). Inspired by my late grandmother's love of that state, the first movement is an homage to her.

When Catherine Sheridan wrote to me about composing a piece for trumpet and piano, my first thoughts were of my late grandmother, Gertrude, who was always suggesting that I write a piece with Colorado as the subject. She loved that state. And while she lived most of her life in California, she always longed to go back to Colorado amongst the quaking aspens, the mountains, the rivers and the vibrant colors. I have at last taken her up on her suggestion referencing the “Centennial State”, a nickname given to Colorado for being inducted into the Union one hundred years after the signing of the Declaration of Independence. The first movement in particular is an homage to my grandmother.

The trumpet and concert band adaptation was commissioned by a consortium of 14 groups and individuals.