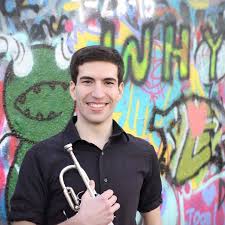 Casey Martin (b. 1989, Long Beach, Calif.) is an American composer and trumpeter.

Mr. Martin received bachelor's degrees in trumpet performance and composition from California State University Long Beach where he studied trumpet with Rob Frear and David Washburn, and composition with Alan Shockley, Adriana Verdie, Robin Cox, Martin Herman, Carolyn Bremer, and Ryan Brown. He is currently [2017] attending the University of Texas at Austin for his master's in composition, where he has studied composition with Dan Welcher, Russell Pinkston, and Yevgeniy Sharlat and trumpet with Ray Sasaki.

Martin's compositional output spans a wide variety of genres and mediums, including chamber music, large ensemble concert music, fixed media electronic music, short film scores, and music for table-top RPG's. Recent commissions include his Symphony No. 1 Ocean by True Brass Choir and his trumpet septet The Autonomy of Machines by Professor Ray Sasaki for the UT Austin trumpet studio. In June 2015 his Symphony No. 1 was premiered by True Brass in the Long Beach Aquarium of the Pacific for the largest crowd recorded in the aquarium's history. Casey was selected to attend Brevard Music Center in the summer of 2015 to study with composers Robert Aldridge and David Dzubay.

Along with composing, Casey maintains an active career as a trumpet player. He served as principal trumpet of the Los Angeles-based Young Musicians Foundation Debut Orchestra from 2013-2014 under the baton of Roger Kalia. In 2013 Casey was featured as a soloist with Cal State Long Beach's trumpet ensemble at the National Trumpet Competition, where the group placed 3rd out of more than sixty ensembles from across the country. Also in 2013 he was featured as a soloist with the Bob Cole Conservatory Wind Symphony.