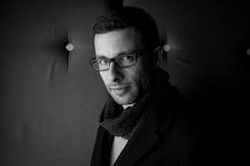 Carlos Eduardo Garcia (b. 1983) is a Portuguese composer, pianist and educator.

Garcia taught music initiation and music training at the National Conservatory Music School for eight years, also directing several children's and youth orchestras. He is currently an assistant professor at the Superior School of Music in Lisbon, teaching in the Choral Direction / Music and Music in the Community courses.

As a freelance pianist Garcia participates in projects of different styles of music and regularly writes original pieces and arrangements for different types of groups. He has had the pleasure of working with Carlos do Carmo, Luis Represas, and Ricardo Ribeiro, among others. He currently works with the trio Portugoesas paying homage to traditional Goesa music.

In Garcia's compositions, the most noteworthy are the sacred works Missa Breve (2011) and Stabat Mater (2013), both for choir and string orchestra and the Musical Theater A Rua (2014) Scored by Carolina Gaspar. He is a regular composer in the Orquestra Geração project, where he has written several original arrangements and pieces over the last few years.

In the field of music for children, in addition to performing regularly staged concerts for children with different projects, in 2014 Garcia launched through the Porto Editora and Constróisons his Cancioneiro da Bicharada in book-CD format.

During the year 2016 he was a resident composer of the Chamber Orchestra of Cascais and Oeiras.