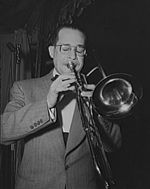 Caravan is an American jazz standard that was composed by Juan Tizol and Duke Ellington and first performed by Ellington in 1936. Irving Mills wrote lyrics, but they are rarely sung. The exotic sound of Caravan interested exotica musicians; Martin Denny, Arthur Lyman, and Gordon Jenkins all covered it. Steven Soderbergh used the Lyman version in his 2001 film Ocean's Eleven. The song appears often in the 2014 film Whiplash as an important plot element. The Mills Brothers recorded an a-cappella version in which they imitated instruments with their voices. Johnny Mathis recorded the song in 1956. More than 350 versions have been recorded.

One of the most recognizable of all Duke Ellington tunes, this distinctive composition combines the styles of Latin and big band jazz. Richard Saucedo gives this classic an impressive new setting for concert band.