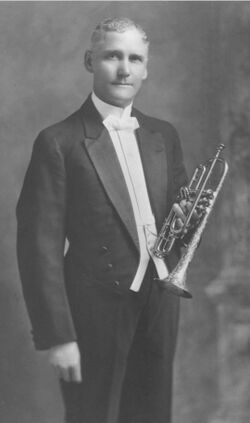 As a youngster, Barnhouse developed a keen interest in music, and was given a second-hand cornet by an uncle. Barnhouse quit school at age 14 to work as a laborer in local factories, learning the machinist's trade, but spent many hours teaching himself to master the cornet. His determination paid off, and at 16 he was elected leader of the Grafton town band, a post he held briefly until his decision to "see the world" and join up with various traveling show bands, first as a cornetist and later as leader. Barnhouse established a favorable reputation as a bandleader and cornet soloist on the touring circuit, and during this period began to compose band music.

His travels brought him to Mt. Pleasant, Iowa, in 1888 where he decided to open his own band music publishing enterprise. Using his skills as a machinist, Barnhouse created his own music engraving tools to make printing plates for his own compositions. His first advertising bulletin introduced five marches, most of them designed for small town bands and touring ensembles. Meeting with great success, the C. L. Barnhouse Co. was born in a 9' x 12' room, thus beginning a long and successful career as "The Iowa Music Publisher."

Barnhouse accepted a position in 1890 as leader of the Burlington, Iowa, Boat Club Band, and in 1892 settled permanently in Oskaloosa, Iowa, where he was hired as leader of the Knights of Pythias band. The publishing company moved with him, and for the remaining decades of his life the C. L. Barnhouse Company flourished. In addition to Barnhouse compositions, the company's catalog included works by leading composers of the day including Karl L. King, Fred Jewell, Russell Alexander, J. S. Taylor, W. H. Kiefer, George D. Barnard, and many more. Composer/soloist Clay Smith wrote, "Starting with no financial assistance in an environment which was anything but conducive to his artistic accomplishments, C. L. Barnhouse has done some might big things, musically." Under his direction, the Oskaloosa band (later named the Iowa brigade Band) became one of the finest semi-professional concert bands in the country. The publishing company which he founded continues its operation in Oskaloosa, and is highly regarded as one of the premier band music publishers in the world.

C.L. Barnhouse is known to have written under the pseudonyms "A.M. Laurens" and "Jim Fisk."