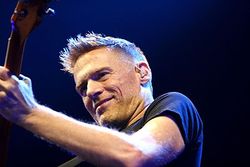 Adams left school at age 16 and began playing in various clubs. His 1984 album Reckless made him famous, and he had further success with rock ballads. His song Everything I Do, I Do It for You, from the film Robin Hood, sold 8 million copies.

For his contributions to music, Adams has garnered many awards and nominations, including 20 Juno Awards among 56 nominations, 15 Grammy Award nominations including a win for Best Song Written Specifically for a Motion Picture or Television in 1992. He has also won MTV, ASCAP, American Music awards, three Ivor Novello Awards for song composition and has been nominated five times for Golden Globe Awards and three times for Academy Awards for his songwriting for films.

Adams was awarded the Order of Canada and the Order of British Columbia for contributions to popular music and philanthropic work via his own foundation, which helps improve education for people around the world.