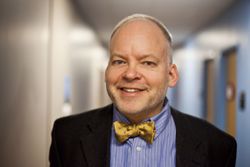 Brian Robison (b. 1964) is an American composer and educator.

The creative work of Brian Robison reflects his performing experience in a broad range of musical styles. Recent awards include commissions from the Argosy Foundation Contemporary Music Fund (2008) and Dinosaur Annex Music Ensemble (2008), and composer residencies at Aaron Copland House (2006), the MacDowell Colony (2006), and Norton Island (2005). Additionally, in 2005 a comprehensive “Brian Robison Collection” was initiated as part of the Contemporary Music Research Collection in the Diehn Composers Room at Old Dominion University (Norfolk, VA), to facilitate scholarly investigation of his music.

In July 2000, the American Composers Orchestra named him the winner of the 2000 Whitaker Commission; the new work, In search of the miraculous, received its world premiere performance by the ACO in Carnegie Hall in 2003. A recording of his first work for wind ensemble, The Congress of the Insomniacs, was made by Dr. Frederick T. Harris, Jr. and the MIT Wind Ensemble, for whom the work was written. Robison also composed and performed the soundtrack to a 1920s short silent film, Cockeyed, available in the 3-DVD set More treasures from American film archives, 1894-1931, and contributed soundtracks for four brief WWI-era cartoons in the next set, Treasures III: Social issues in American film, 1900-1931.