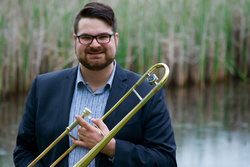 At UMASS, Martin was the lead/principal trombonist in Jazz Ensemble I, the Symphony Orchestra, and the Wind Ensemble. Before moving to Massachusetts, Martin performed most commonly with Grand Ave Ruckus, the 'Ceptet, the Metro Brass Quintet, and as a regular sub with The Des Moines Big Band.

In addition to performing, Martin is a prolific composer of music in the classical and jazz realms. His current primary focus is writing for his Brian Martin Big Band, an elite ensemble comprised of many of the top jazz musicians from Iowa and New England that is dedicated to performing his original compositions and arrangements.

His original composition Lookin’ Forward was selected for performance during the Young Composers Showcase at the Tenth Annual JEN Conference, and was performed by the U.S. Army Jazz Ambassadors . He has been commissioned to write music for ensembles ranging in ability and style from elementary band to collegiate jazz to high school show choir.

As an educator, at UMASS, he directed the Jazz Lab ensemble, and coached a jazz quintet of undergraduate students. He has presented masterclasses on trombone performance, improvisation, and jazz pedagogy to middle school, high school, and collegiate students. His high school private students have been members of ensembles at the All-State and All-District levels, as well as participants of various honors ensembles. During his tenure as a public school band director, his students received many awards and honors, most notably representing his district's band program in the Iowa All-State Music Festival in 2016.

Mr. Martin remains active in both Iowa and New England as a performer, writer, and teacher. He is currently on the music staff of Derby Academy.