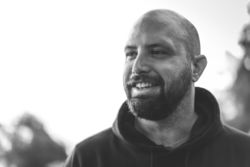 Brian Baumbusch (b. 23 April 1987, Washington, D.C.) is an American composer and educator.

From 2016 to 2018, he taught composition, music theory, and music history on the faculty at Santa Clara University where he also directed the Balinese Gamelan ensemble and where he continues to teach while pursuing his D.M.A. Baumbusch has lectured on composition and world music at the University of Maryland, The Smithsonian Institution, CalArts, Union College, Holy Cross, Bard College, Mills College, U.N. Reno, and the Escuela TAI of Madrid. He has additionally presented electronic music performances and lectures at UCSD, UCSB, CalArts, UNR and Mills College.

Baumbusch has conducted extensive research and collaborated with a variety of musicians from around the globe. In 2009, he founded the Cacho Ensemble in Madrid, dedicated to reviving traditional Argentinean folk music, which has performed throughout Europe and the United States. In 2010, Baumbusch completed the first full English translation of Atahualpa Yupanqui's epic poem El payador perseguido. Baumbusch has also performed with many Balinese gamelan groups across the U.S., including Sekar Jayaof the Bay Area, Dharma Swara of New York, and Galak Tikka of Boston, among others.

In 2012, Baumbusch produced a collaboration with the JACK Quartet and Balinese choreographers Dr. I Made Bandem and Dr. Suasthi Bandem, together with Dr. Bandem's performing group Makaradhwaja. They premiered their collaboration at the Bali Arts Festival in June 2012.

In March of 2020, Baumbusch was commissioned to compose Isotropes for the University of California (Santa Cruz) Wind Ensemble, a 25-minute piece that allows for each performer to record their part along to an individualized click track. This remote-learning piece allowed the ensemble to stay active during the shelter-in-place lockdown due to COVID-19.