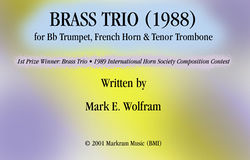 Brass Trio (1988) was composed by Mark Wolfram and premiered at the 1989 International Horn Society convention in Munich, Germany where it received the Grand Prize in their annual composition contest. Scored for Bb Trumpet, French Horn and Tenor Trombone, the composition utilizes fourth and fifth structure tonalities and features three contrasting movements.

The first movement, "Fanfare," opens with strong ensemble figures based on a fourth-structure chord. Following the introduction a Trumpet presents the first theme - a fluid line with unexpected contours. The rhythmic under-pinnings from the French Horn and Trombone use 5/8 and 7/8 time signatures to add an unexpected lilt and freshness. The restatement of the first theme has a close, "jazz"-type harmonization. The Trombone and French Horn trade motifs in the next section, which then develops into a restatement of the opening ensemble figures, this time with more ornamentation, followed by a strong, jaunty conclusion.

The second movement, "Elegy," starts with a sensitive Trombone solo with Trumpet and Horn underpinnings. This melody is then repeated by the Trumpet. As the motifs from this simple melody evolve, the ensemble builds to a dramatic climax - and then quickly subsides to several thematic restatements of the climactic motif. Finally, the movement ends on a soft, simple open-fourth-structure chord.

The third movement, "Dance," is a bright, full-voiced, multi-metered romp. The contrasting middle section has the brass in straight mutes playing long melodic lines with pointed replies. The movement then reprises its opening, followed by a short, rousing coda. The duration is approximately 6 minutes. "Brass Trio (1988)" has been performed worldwide and has been featured repeatedly on BBC Radio.