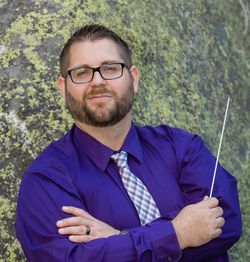 Mr. Brad Hart is currently the instrumental music teacher at Johansen High School in Modesto. He also serves as the visual and performing arts department chair, the Modesto City Schools High School Music chairperson, president of the Stanislaus County Music Educators Association, and president of the New Hammer Concert Band. Mr. Hart has led his ensembles through various commissions and special projects. The program at Johansen has established itself as active members of their community by organizing multiple events that both bring the music to their neighborhood and provide support to local organizations.

Mr. Hart has also served as a guest lecturer for the Modesto Symphony and taught at CSU Stanislaus and University of the Pacific.

Aside from teaching music, he is a published composer with World Projects. His most recent work is Symphony No. 1, Slamming Open the Door.