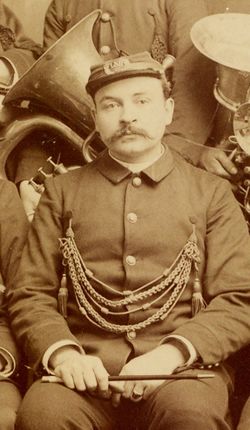 In addition to its suitability for passes-in-review and street parades, Bombasto proved to be extremely popular as entry and exit music during the vaudeville and silent-film era. Like many of Farrar’s other marches, it was dedicated to a military unit, in this instance the Seventh Ward Military Band of Omaha, Nebraska. His Fort Omaha March constituted another salute to that important military and farming center in eastern Nebraska. Although acquaintances remember seeing the composer-conductor in a “military” uniform in Lima, Ohio, the late William Baker learned that Farrar never served in the U.S. armed forces, including the National Guard.