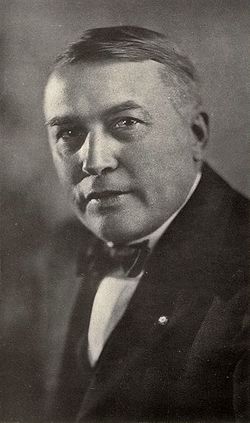 Makovsky (known as "Boh") began his music studies at the age of seven with his uncle, who was instructor to the Royal Family of Russia. His parents died early and he emigrated to Clarkson, Nebraska, in 1895, where he got a job rolling cigars in a local shop. A short time later, he joined a traveling wagon show that needed a clarinet player, and began his work as a professional musician.

A few years later, Boh formed his own band that entertained all across the Midlands, eventually ending up in Oklahoma City. There he gave private music lessons, played in the theater, and directed a concert band in the Delmar Gardens. He had soon started organizing and directing bands in nearby settlements, which he would then turn over to local directors. In 1910, Boh also started directing the Oklahoma City Metropolitan Band and had a longstanding association with the Oklahoma State Fairs.

In 1915 he was invited by the president of Oklahoma A&M College (OAMC) in Stillwater to become band director and department head. Boh started his work there with bands with about 40-50 members who had never had any experience playing in a college setting. As the war ended, veterans returned home, increasing both the size and the quality of Boh's bands. The OAMC Bands quickly grew until it had reached over 100 members in 1922. Although he lacked formal training in music, his experiences as a professional musician and conductor led him to become a music educator with strong ideas on how to teach music and bands.

Boh is also known as the “Guiding Spirit” of Kappa Kappa Psi, which was founded in 1919 at Oklahoma A&M University. He was the first honorary member of this organization, and served as their National President from 1927 through 1929. In 1979, they named an award after him, the Bohumil Makovsky Memorial Award, to recognize outstanding achievement by college band directors

Boh composed several marches, including the Seniors, the Anniversary, the King of Oklahoma, the O.A.M.C., and the 180th Infantry. He donated the royalties from all of his published works to the advancement of Kappa Kappa Psi Fraternity.

Boh became a naturalized citizen of the United States in May 1921. He was granted the title of Head Emeritus of the Department of Music at OAMC upon his retirement, received an honorary Doctor of Music Degree from the University of Tulsa, and was elected to Oklahoma's Hall of Fame in 1939, the 1918 International Who's Who, the 1931 Musical Who's Who in the U.S., and the 1935 Who's Who in Oklahoma. In 1987, he was posthumously inducted as a charter member of Oklahoma Music Educators Association Hall of Fame, and into the Oklahoma Bandmasters Association Hall of Fame.