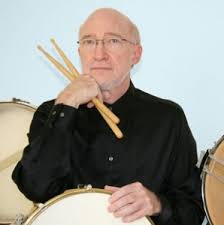 Bob Becker (b. 22 June 1947 (Allentown, Penn.) is an American percussionist and composer.

Percussionist James Betz initially taught Becker marimba, but soon expanded to lessons in snare drum, piano and music theory. After high school, Becker left Allentown to enroll in the Eastman School of Music, where he studied percussion performance with William Street and John Beck, and composition with Warren Benson and Aldo Provenzano. Becker holds a Bachelor of Music degree with distinction and a Master of Music in performance and literature degree from Eastman.

Upon completing his undergraduate and graduate studies, Becker enrolled in a four-year world music program at Wesleyan University in Connecticut where he studied with world percussionists Prawotosaputo, Sumarsam, and Freeman Donkor, as well as tabla instructor Sharda Sahai and African drum instructor Abraham Adzenyah.

Becker is known primarily as a founding member of the Nexus percussion ensemble, as well as a performer in the Steve Reich and Musicians ensemble. He primarily performs as a keyboard percussionist, but is also skilled in tabla and concert snare drumming. As a composer, Becker employs a multicultural approach by mixing the style of western military drumming with North Indian Hindustani idioms, such as raga scale patterns and tabla drumming. This fusion of compositional practices is the main focus of works like Lahara and Mudra. There are also traces of influence from the music of minimalists like Steve Reich, which can be attributed to Becker's experience with that composer's music.