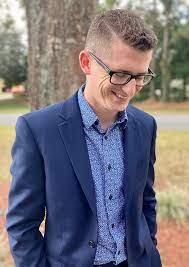 “Blind tiger” was another name for a speakeasy, which was an illicit drinking establishment very prominent in the United States during the prohibition era. These gangster-run nightclubs featured the growing genre of jazz music and were one of the first places to allow whites and blacks to mingle socially. The concept of these ‘hush-hush’ societies was very intriguing to me; people of different backgrounds coming together to have a good time in the 1920’s was revolutionary, and I feel like our society has lost sight of this, with the world of music being an exception.

My goal for this piece was to have a fun ‘lick’ for each section to play and others to appreciate, thus bringing us all together in the fashion of a rollicking, funky concert opener.

The percussive introduction serves as a jungle-inspired alarm that spreads through the band. The opening wind interjections are derived out of the rhythms in the percussion section, and are prevalent throughout the piece. Our musical nightclub introduces one idea at a time and eventually we have many ostinatos combining into one funky groove. A vast majority of the melodic material in the piece is inspired by the "Bb Blues. "