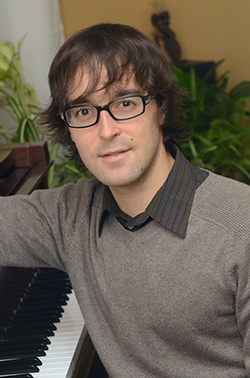 The form of my piece is different from a prototypical (classical) concerto, which would end with a virtuosic display from the soloist that would rouse the audience to its feet. In my piece, the most soloistic cadenza-like material happens much earlier, and as the piece progresses the focus shifts to other aspects of musicality and ensemble. The reason is that the piece is modeled on a complex biological system viewed from different perspectives, from very zoomed-in to very zoomed-out. The median level, where the piece begins and to which it returns several times, is “organism,” which, by foregrounding the soloist against the ensemble texture, suggests a strong distinction between an individual and their environment. Over the course of the piece the perspective changes several times, zooming in to “organs” and “cells” and zooming out to “ecosystem,” musical sections in which the soloist integrates more closely into the ensemble and whose time structures and levels of activity abstractly represent these biological scales. The final, longest section, “biome,” is the most zoomed-out of all. I imagine a planetary view, and the harmonies and textures follow a recurring four-phase cycle mirroring the seasons. The period of the cycle gradually becomes shorter and shorter, in the same way that years seem to pass more quickly as we age. At this point the soloist is almost detached from the whole, trying several times to interject but having only a transitory effect as the system continues in its inexorable process.

The overall trajectory of the piece moves from an individual-centered perspective, in which one’s own actions seem very important, to a global-centered one, in which those same actions may seem almost ineffectual. The abiding concept is that the significance of things is a function of the perspective from which they are viewed, each level depending on other levels of order beneath and at the same time providing foundations for levels of order above. I am interested in this idea as a general ontological principle, but in our changing times it reverberates with particular significance for questions of personal agency and ecological interconnectedness.

The end of the piece dissolves pitch into noise, and the final gesture from the soloist is an exhalation. It is not clear whether it is the organism, or the biome, or both, that expire.