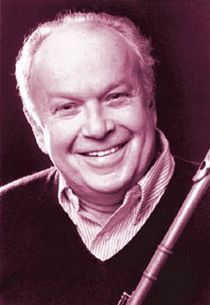 Although Holcombe was primarily known as an arranger and composer of music for recording dates and symphony orchestras, for many years he pursued a parallel career as a professional woodwind doubler.

While studying composition at the University of Pennsylvania in 1941, Bill was a pupil of Harold Bennett, then the piccolo player of the Philadelphia Orchestra. In addition to his extensive training in writing music, Mr. Holcombe majored in flute at Julliard. After World War II, he returned to Penn, working his way through college playing with and arranging for area big bands. After graduating from Penn (with high honors), Bill went to New York City to get his AFM 802 card and to break into the then lucrative staff radio and recording scene.

Things soon began to move faster for Bill. While studying with Dick Jacobs and Sy Oliver, Bill was introduced to Tommy Dorsey, who hired him as a utility reed player and staff arranger. After a year with the Tommy Dorsey Band, Bill returned to New York, taking a six-month position with Fred Waring and the Pennsylvanians. When he completed this stint, Bill was immediately hired to play first flute and doubles for Metro-Goldwyn-Mayer at their New York radio station, WMGM.

In the late fifties, Bill wrote the music for several film scores. Throughout the sixties, he wrote for the recording orchestra 101 Strings during the day and played Broadway musicals at night.

Since founding Musicians Publications, he wrote and edited several hundred pieces for chamber ensembles, developed an internationally acclaimed series of jazz etude books and led his company to the forefront of small American music publishers.