Between the Sea and Rhyl 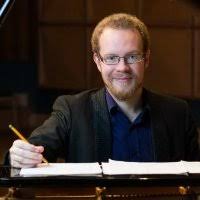 From 1874 to 1877, during his studies at St. Beuno’s College, a Jesuit seminary (located in St. Asaph, Denbighshire, north-east Wales), British poet Gerard Manley Hopkins (1844-89) wrote many important poems influenced by Welsh landscapes and poetry. In his 1877 sonnet The Sea and the Skylark, originally titled Walking by the Sea, he presents a clear duality: the natural world of the sea versus the civilized world of man. This sonnet was conceived while Hopkins walked along a beach in Rhyl, the ocean and skylarks on his left, and the growing tourist town on his right. Within the sonnet’s internal rhyming structure, Hopkins adopted a Welsh poetic device known as cynghanedd, which literally translates as “harmony”.

My piece portrays and expands upon Hopkins’ sonnet by way of a soundscape, while contextualizing the sonnet’s content within Welsh culture. This includes recreating and applying the sonnet’s metre and structure, deriving the harmonic worlds from Welsh folk tunes, and creating local rhythmic gestures based on Hopkins’ use of cynghanedd. The Welsh folk tunes cited in this work include Ar Lan y Mor (Beside the Sea), the war march Men of Harlech, the religiously charged Ar Hyd y Nos (All through the Night), and the more obscure, lamenting Y Galon Drom (The Heavy Heart). In spatializing the content of the fixed media files (which include ocean field recordings and the 1890 recording of Ar Hyd y Nos) and the trio soloists behind the audience, the piece guides the listener through an imaginary 12-minute journey where Hopkins walks along a beach while composing his sonnet.

This piece was composed as part of the composer-in-residence program with the McGill Wind Orchestra.