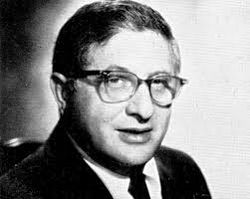 Bernard Herrmann (29 June 1911, New York, N.Y. – 24 December 1975, North Hollywood, Calif.) was an American composer known for his work in composing for motion pictures. As a conductor, he championed the music of lesser-known composers.

Born as Max Herman, Hermann attended high school at DeWitt Clinton High School, an all-boys public school. His father encouraged music activity, taking him to the opera, and encouraging him to learn the violin. After winning a composition prize at the age of thirteen, he decided to concentrate on music, and went to New York University where he studied with Percy Grainger and Philip James. He also studied at the Juilliard School and, at the age of twenty, formed his own orchestra, the New Chamber Orchestra of New York.

In 1934, he joined the Columbia Broadcasting System (CBS) as a staff conductor. Within two years he was appointed music director of the Columbia Workshop, an experimental radio drama series for which Herrmann composed or arranged music (one notable program was The Fall of the City). Within nine years, he had become Chief Conductor to the CBS Symphony Orchestra. He was responsible for introducing more new works to U.S. audience than any other conductor — he was a particular champion of Charles Ives' music, which was virtually unknown at that time. Herrmann's radio programs of concert music, which were broadcast under such titles as Invitation to Music and Exploring Music, were planned in an unconventional way and featured rarely heard music, old and new, which was not heard in public concert halls.

While at CBS, Herrmann met Orson Welles, and wrote or arranged scores for radio shows in which Welles appeared or wrote, such as the Columbia Workshop, Welles's Mercury Theatre on the Air and Campbell Playhouse series (1938–1940), which were radio adaptations of literature and film. Between two movies made by Orson Welles, Hermann wrote the score for William Dieterle's The Devil and Daniel Webster (1941), for which he won his only Oscar. In 1947, Herrmann scored the atmospheric music for The Ghost and Mrs. Muir. In 1951 his score for The Day the Earth Stood Still featured the theremin.

Herrmann is most closely associated with the director Alfred Hitchcock. He wrote the scores for seven Hitchcock films, from The Trouble with Harry (1955) to Marnie (1964), a period which included Vertigo, North by Northwest, and Psycho. He also was credited as sound consultant on The Birds (1963), as there was no actual music in the film as such, only electronically made bird sounds.

From the late 1950s to the mid-1960s, Herrmann scored a series of notable films, including Journey to the Center of the Earth, François Truffaut's Fahrenheit 451, Sisters and Obsession for Brian De Palma and Taxi Driver (1976), directed by Martin Scorsese.

For television, he wrote the scores for several well-known episodes of the original Twilight Zone series, including the lesser known theme used during the series' first season, as well as the opening theme to Have Gun–Will Travel.