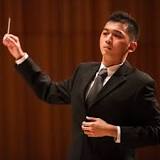 Benjamin Yeo (b. 30 November 1985, Singapore) is a Singaporean composer and conductor.

Yeo's music education started at the age of seven; he played the trumpet in his secondary school and junior college. Being very active in the local band scene, he has guest performed for many tertiary groups as well as guest conducted many ensembles in Singapore. His experience in band directing has enabled him to work with students across a wide spectrum of educational institutions, from primary to tertiary levels. As a band enthusiast, he started writing and arranging music for wind bands and ensembles at the age of 15, and his works have also been performed publicly in local and overseas concerts.

Benjamin also joined the Singapore Armed Forces Bands during his national service where he continued his musical training. Currently, he is studying Music and Education at the National Institute of Education, Nanyang Technological University. He also serves as the resident conductor of the Saints Alumni Band, Singapore.