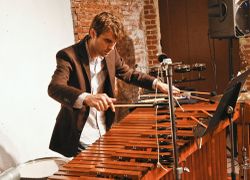 Mr. Phelps is director of What’s Next?, a leading post-classical new music event and performance collective in Southern California, and has performed and collaborated extensively with many other local chamber music groups, including the Definiens Project, the Los Angeles Percussion Quartet, WildUp, and the pioneering multimedia based theater company Rogue Artists Ensemble. In 2009, in conjunction with What’s Next?, he founded the Los Angeles Composers Project, the most comprehensive survey of local music from composers of all stages of their careers in Southern California. His new project, The B Band, is an eclectic “classical band” created for performance in both clubs and the concert hall. Commercially, he has toured the world as an assistant conductor for Lord of the Rings Live, presenting the entire score, performed live by an orchestra to the films.

His music has been performed by the likes of the Minnesota Orchestra, the Argus String Quartet, pianist Vicki Ray, the Bass Clarinet Duo Sqwonk, and by percussion ensembles across the country, including The Los Angeles Percussion Quartet and Talujon Percussion Group, and many more.

Phelps is also an accomplished percussionist. He has worked with such composers as Steve Reich, Thomas Adès, Michael Gordon, and John Adams. He can be heard performing frequently with orchestras in the Southern California area as well on locally recorded film and television soundtracks.