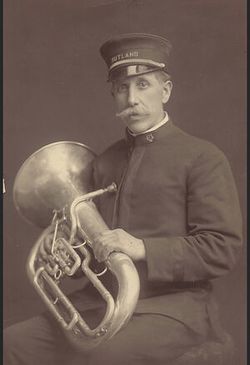 Beelzebub was the prize-winning entry in an 1886 competition for instrumental solos sponsored by the Carl Fischer Company. It was first published in 1887.

Acrobatic and fun, Beelzebub for solo tuba and concert band was written by well-known 19th-century tubist Andrea Catozzi. Back in 1886, this grand classic of the early tuba literature won Carl Fischer Music's competition for solo instrumental music. Today, in an era when tuba technique has been pushed ever forward to greater technical heights, this virtuosic piece is more relevant than ever.

Beelzebub or Beelzebul is a name derived from a Philistine god, formerly worshipped in Ekron, and later adopted by some Abrahamic religions as a major demon. The name Beelzebub is associated with the Canaanite god Baal. In theological sources, predominantly Christian, Beelzebub is another name for Satan. He is known in demonology as one of the seven princes of Hell. The Dictionnaire Infernal describes Beelzebub as a being capable of flying, known as the "Lord of the Flyers", or the "Lord of the Flies".